On the occasion of 1-month after the official launch of 5G, CTM hosted the Inauguration Ceremony of 5G New Era and Ushering into Digital Macau 3.0 Forum 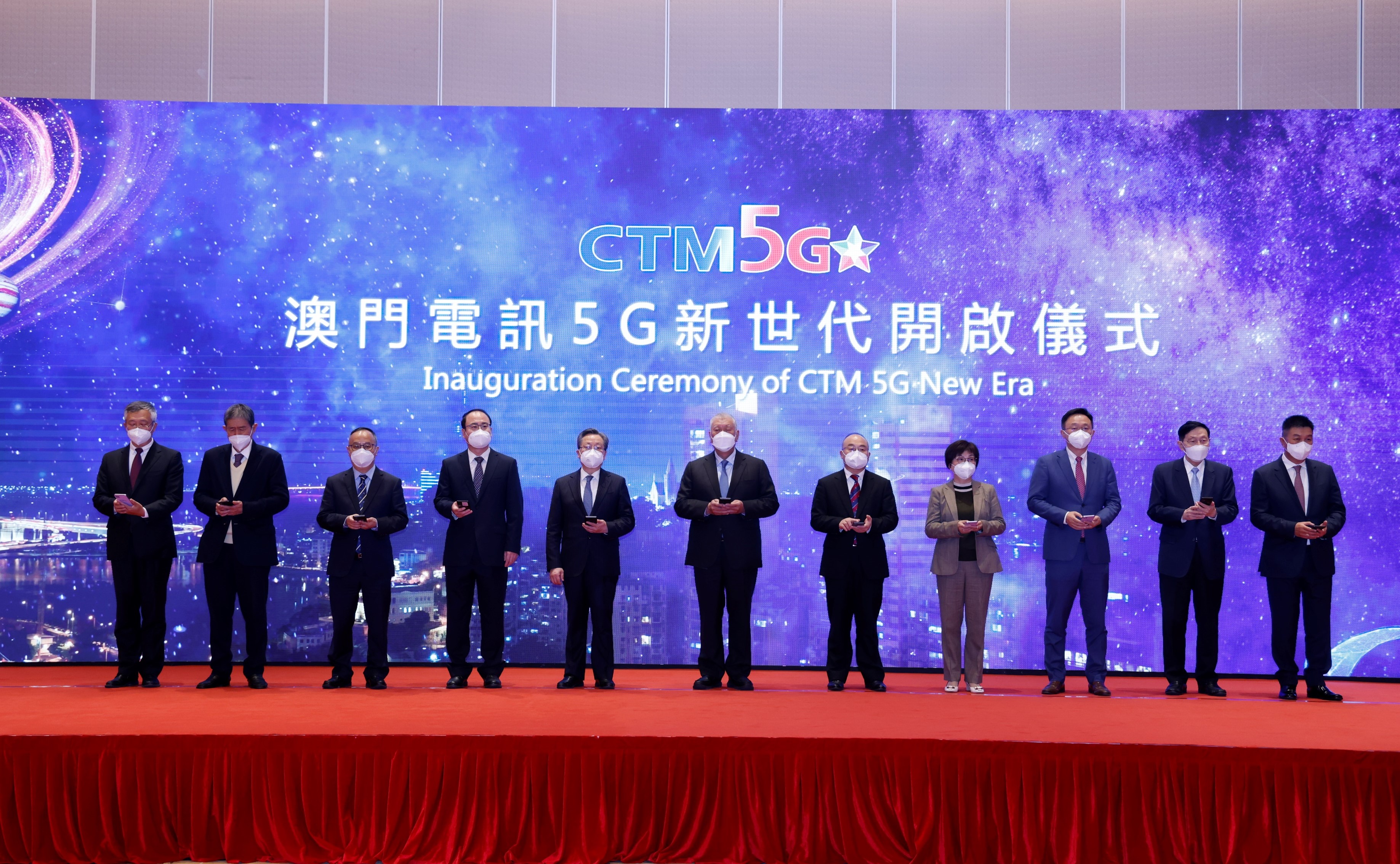 On the occasion of 1-month after the official launch of CTM5G , the Inauguration Ceremony of CTM 5G New Era and Ushering Into Digital Macau 3.0 Forum jointly hosted by CITIC Telecom International and CTM was held today at the University of Macau. The event was attended by guests from various government departments, enterprises, associations and educational institutions, together witnessed Macau advance into the new 5G era, to collect wisdom on the promotion of “Digital Macau 3.0” development, inject forces to create a greener and liveable smart city, and to inaugurate a new chapter of digital economy in the Greater Bay Area.

During the opening speech delivered by Mr.Xi Guohua, Vice President and General Manager of CITIC Group, said that the Group started investing in Macau as soon as its establishment in early 80s for Macau Cement Manufacturing Co. Ltd. and CTM. Over the years, CITIC’s enterprises in Macau have been adhering to the principle of “grow together with Macau”, benefitting by the characteristics of CITIC Group’s rich combination of industries, and actively participated in the construction of the Guangdong-Hong Kong-Macau Greater Bay Area, while fully cooperating with the MSAR government’s policy.  The business development in Macau has gained fruitful results, CITIC forces have also contributed to the long-term economic and social development in Macau, facilitating Macau to create a successful model of “One Country Two Systems”. The unique advantage of CITIC Group’s combination of industries and finance, and diversified business sectors will create great achievements in Macau’s economic transformation development.

According to introduction, in recent years, CITIC Group has given full play to its advantages in comprehensive financial services and fully supported the development of a number of 5G leading companies and key companies in the industrial chain. In addition, CITIC Group has a spectrum of investment in the information industry, covering cross-border telecommunications, satellite communications, basic telecommunications, network services, cloud services, and has leading digital and intelligent service capabilities, meanwhile, through the continuous expansion of new technologies such as 5G and the integration and application of its comprehensive finance, advanced intelligent manufacturing, modern agriculture, urban construction and other scenarios, CITIC Group has achieved the industrial transformation and high-quality development.

Mr. Wang Guoquan delivered the keynote speech of topic “Embrace 5G , jointly creating a smart future”  at the Digital Macau 3.0 Forum that the key objective of 5G applications is to empower efficiency, and ecological cooperation is the only way to achieve..  With the inauguration a new 5G era in Macau, CITIC Group will continue to support CITIC Telecom International and CTM in strengthening their strategic layout, to fully promote the construction of 5G network, fiber network and cloud network facilities in accordance with the principle of moderate advancement, and improve high-speed ubiquitous and cloud network Converged, secure and controllable digital information infrastructure. Rooting on the development stage of Macau industry,  to exploit  5G dedicated service  and solutions to facilitate  industrial transformation  including finance, education, medical care, and government affairs, while actively seeking practical cooperation in the fields of finance, urban construction and operation, medical health, green low-carbon, cultural tourism, etc., to create a good platform in data sharing, technology research and development, and talent training to promote the construction of Guangdong-Hong Kong-Macau Greater Bay Area and Guangdong-Macau Hengqin In-depth Cooperation Zone,  to support the moderate  diversified development of Macau’s economy and the improvement of people’s livelihood.

During the occasion, through the video “Inaugurate a New Chapter of Smart Macau”, CTM demonstrated that with the full support from CITIC Group and CITIC Telecom International Group and riding on the advantages of information technology, it will foster the momentum of innovative development and promote the realization of the “Digital Macau” smart city blueprint , serve the economic and social development of Macau , continue to usher Macau to integrate into the overall national development of the country, and enrich the practice of “One country Two systems”. During the occasion, CTM announced the number of 5G customers has reached over 50,000 after 1-month following the official launch of 5G service.

Get together depicting Macau’s smart future

Mr. Xin Yuejiang expressed thankfulness to the guests for participating in the forum and thanked all sectors of the society for their long-term support and trust to CTM over the years. He said that CITIC Telecom International has a deep relationship with Macau and remained confident in the future of Macau. . With the official launched of 5G, CTM will accelerate the construction of “Digital Macau” smart city and stimulate Macau’s economic development. CITIC Telecom International and CTM will continue to uphold the moral of “Be with Macau, Build Macau, Serve Macau”, to cope with the policy of the MSAR Government to support various sectors in the society to further develop the economy and livelihood, as well as practicing the great national strategy of “One Country Two Systems”, contributing to the brilliant future of Macau.