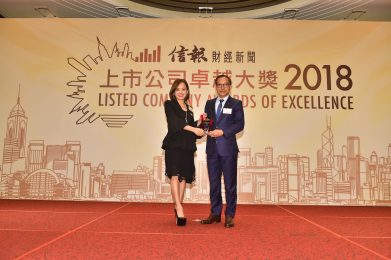 CITIC Telecom International Holdings received the ‘Listed Company Awards of Excellence – Main Board’ from Hong Kong Economic Journal in November 2018. The award ceremony was held at the Intercontinental Hotel in Hong Kong on November 5, 2018. Management of the Group and representatives from its subsidiaries attended the ceremony. Reputable companies, business leaders and professionals gathered in the same venue, including the officiating guests – Dr. Bernard Chan, Under Secretary for Commerce and Economic Development Bureau of HKSAR, Prof. Frederick Ma, Chairman of MTR Corporation, and members of the Legislative Council, to celebrate the success of the award-winning enterprises.

Dr. Tiger Lin, Executive Director and Chief Executive Officer of CITIC Telecom, received the award on behalf of the Group. Lin said in his speech that CITIC Telecom is a leading Internet-based integrated telecommunications and ICT company in the Asia-Pacific region. Its network covers more than 130 countries and regions around the world, and it is a pioneer in the Asia-Pacific telecommunications industry. CITIC Telecom always put customer first with advanced technology. Lin thanked its shareholders, customers, partners, media, commentators and the society for their support, and also thanked HKEJ for its recognition. The Group will strive to better serve its customers, create value and return to the society.

This is the 3rd “Listed Companies Awards of Excellence” and there are three categories – blue chip, main board, and GEM. “EJFQ”, a stock-tracking system developed by HKEJ was used to access the companies in the selection process. Shortlisted companies were chosen according to the Piotroski F-Score, the relative performance against the Hang Seng Index, the number of recommendations made by professional commentators and industry leaders, and profitability growth. The list was then reviewed by the committee composed of industry leaders, analysts and editors, and finally vetted by KPMG. Therefore, the winning list is a reliable and valuable reference for investors.

In January this year, CITIC Telecom was recognised as the “Best SEHK Dividend Payers” by a third-party stock rating agency, which stated that the Group has maintained paying dividends and the dividend kept growing over the past decade. In March this year, it was selected as a constituent of five “Hong Kong Stock Connect Thematic Indexes”. 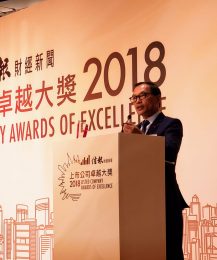 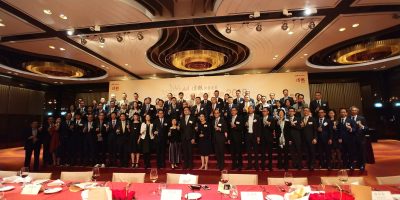 Xin Yue Jiang, Chairman of CITIC Telecom International was interviewed by HKEJ to talk about the Group’s development in 20 years and the development plan along the direction – becoming an Internet- oriented telecommunications enterprise. the interview article could be downloaded in below section.

And the interview video could be viewed here or in the below section. 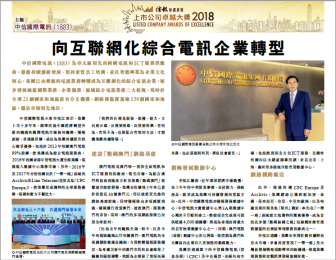